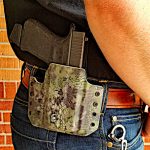 A fire fighter working for Merrionette Park was charged with felony reckless discharge of a firearm after shooting his legally concealed pistol during what he claims was self-defense situation. According to Patch, Cook County Judge, John Mahoney, released 30-year-old Jeremy Bruno on $10,000 bail and had the public servant placed in an electronic monitoring device […]